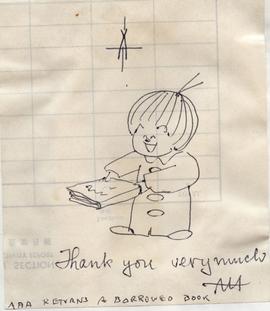 Cartoon signed, "AAA," for Dr. Akio Awa who is depicted as returning a borrowed book. The caption reads, "Thank you very much." The title of the cartoon appears to be in someone else's hand, and it is presumed as Dr.Hamilton's, who may have created some of the titles for some of these illustrations.