Narrow your results by: 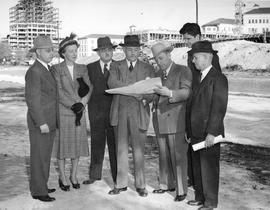 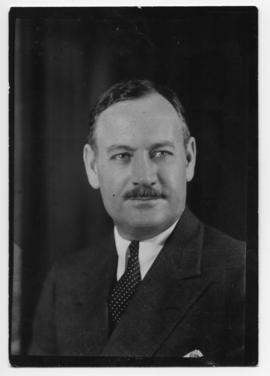 Interview with Colonel William B. Bates, Part 3 of 3

Col. William B. Bates, Part 3 of 3. Interviewed by Don Macon. Col. Bates discusses further the relationships of the M. D. Anderson Foundation and the institutions in the Texas Medical Center. He speaks of Dr. E. W. Bertner and Dr. R. Lee Clark. Col. Bates then turns to his interest in education and Texas History. He describes the evolution of the University of Houston and his participation in the San Jacinto historical Association. A discussion of the involvement of the Houston Chamber of Commerce in the development of the Texas Medical Center concludes the series. (MDAH Master #30-1-73)

Interview with Dr. David A. Wood

Dr. David A. Wood. Interviewed by Don Macon. Video recorded 9/25/1975. Approx. 30min. Color-Sound. MDAH Master #401-1-75. Produced for The University of Texas - Texas Medical Center Historical Resources Project. Dr. Wood briefly discussed his early history from his birth near the River of Lost Souls, in New Mexico through events that led to his interest n Pathology. He spoke of his wife who is a RN and his five children, one of whom is a MD, another who is interested in academic medicine. Sketching his career, Dr. Woods provided information about the American Cancer Society. He also talked about Dr. E. W. Bertner, Dr. R. Lee Clark, Dr. Murray Copeland, Dr. Grant Taylor, and Senator Frank Church. Dr. Wood emphasizes that the cancer story is a message of hope.

Frederick C. Elliott, DDS, Interview, Part 2 of 5, U-matic Tape, Master. 1932-1943. Interviewed by Don Macon. Video recorded 7/23/1973. Produced for the Texas Medical Center Historical Resources Project. Part 2 of this series covers Dr. Elliott's activities from 1932, when he became Dean of the Texas Dental College, until 1943 when the school was brought into the University of Texas System as the Dental Branch in Houston. The Texas Dental College faced financial problems. The faculty was primarily composed of part time staff. Dr. Elliott went to work to improve teaching methods, recruit student and patients for the clinic. Dr. Elliott served on numerous health committees such as the Houston Board of Health and the Public health Commission of the Houston Chamber of Commerce. The image of the Texas Dental College changed from a place that only trained dentists to a health education and awareness institution. During these years Dr. Elliott met Col. William B. Bates who was Chairman of the School Board and Dr. E. W. Bertner who also served on the Houston Board of Health. Efforts to make the Texas Dental College a state school were revived in 1939. House Bill #278 was passed in 1943, and the University of Texas Dental Branch came into being on September 1st. of that year.

Frederick C. Elliott, DDS, Interview, Part 3 of 5, U-matic Tape, Master. 1943-1953. Interviewed by Don Macon. Video Tape Recorded 7/25/1973. Approximately 30min. MDAH Master # 38-1-73. Produced for Texas Medical Center Historical Resources Project. Part 3 begins with a review of material that has gone before. Dr. Elliott discusses the study made by a committee appointed by the University of Texas Board of Regents to recommend locations of the Univeristy of Texas Health Units. He describes the planning and construction of a new building to house the Dental Branch at Houston. Dr. Elliott discusses this association during these years with Dr. E.W. Bertner, Col. William B. Bates, Mr. John Freeman and Dr. R. Lee Clark. He gives insight to the man, Dr. E. W. Bertner, and touches briefly on his tragic illness and death. In 1954 Dr. Elliott was asked to become Executive Director of the Texas Medical Center, Inc. Dr. Elliot tells of his decision to leave the dental school to head a busy medical center that was in the midst of active development.

Jared E. Clarke, MD. Interview by Don Macon. Dr. Clarke, long time Houston physician, discusses his personal family history and his interest in medicine due to physicians in his family. He discusses his education and noted that he knew Dr. Bertner at the University of Texas Medical branch in Galveston although he was two years behind him, graduating in 1913. Dr. Clarke spoke of the hospital facilities in Houston after his return from World War I and the services of doctors prior to the era of the founding and development of the Texas medical Center. Dr. Clarke talked about the founding of the Houston Academy of Medicine and the beginnings of the library now housed in the Jesse H. Jones - TMC Library building. 2/11/1974, 43min, Color-sound (MDAH Master #83-1-74).

Julia Williams Bertner Naylor. Interview by Don Macon. Mrs. Naylor discusses elements of her personal history, her marriage to Dr. E. W. Bertner in 1922, their home at the Rice Hotel for 28 years and their leisure homes at Lake Jackson and the farm near Hempstead. She talks about Dr. Bertner's background, his family history, his education, and his close association with members of the MD Anderson Foundation and others instrumental in the founding and development of the Texas Medical Center. MDAH Master #60-1-73. 10/4/1973. 32:00

Interview with Robert A. Shepherd

Mr. Robert A. Shepherd. interviewed by Don Macon. 2/12/1974. 57min. MDAH Master #84-1-74. Mr. Shepherd, long time attorney with Vinson & Elkins, joined the board of Methodist Hospital in 1943, and served as their legal counsel for many years. Mr. Shepherd discussed his personal family history as residents of Huntsville and later Colorado City, Texas where he was acquainted with the Gus Bertner family and a friend of Bill Bertner. He spoke of his entrance into law school at the Universty of Texas, his military service which interrupted his education, and his studies after the war in the law office of his father, Judge James L. Shepherd. He noted that he was sworn in to the bar on his 27th birthday, 7/7/1921. He gives a history of the Methodist Hospital as well as of the Texas Medical Center. He tells of his roles as board member of Methodist and as their legal representative.

W. Leland Anderson. Interviewed by Don Macon. Mr. Anderson, President of the Board of TMC, Inc., discusses the Anderson Clayton Company and the family relationship with the founders. He talks about his uncle, Mr. M. D. Anderson, Dr. E. W. Bertner and the trustees of the M. D. Anderson Foundation. He discusses the evolution of the Texas Medical Center and the formation of the TMC, Inc., defining the function of its Board of Directors. (MDAH Master #64-1-73) 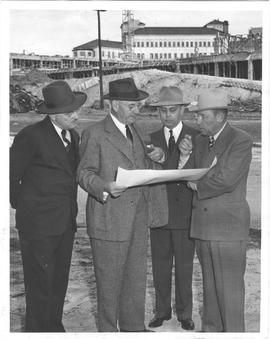 The Texas Medical Center records include TMC charter material, correspondence, committee minutes, interviews and transcripts, photographs and slides, budgetary information, newspapers and clippings, research material for books, surveys, materials related to TMC events and visitors, films and audiocassettes, brochures, architectural renderings, guidebooks and directories, and maps. The materials date from the 1900s to the present. The collection also includes the papers of Mary Schiflett who held leadership positions in the TMC from 1970-2009. The collection has been processed at box and folder level. The material is generally in good condition and consists of 39 cubic feet totaling 93 boxes.

The Texas Medical Center (TMC) Photograph Collection contains photographic materials that document the growth and development of the TMC from the 1930s to 1980s. The collection consists of 2525 items and includes photographic prints, aerial photographs, negatives, transparencies and printed materials. The materials depict the institutions of the TMC, their staff, facilities, services, and patient care. Images show buildings and their construction as well as some photographic copies of architectural renderings. Aerial photographs from the 1940s to 1980s show the TMC grow from marshland to an urban center. The collection provides images of the leaders and historical figures that shaped the TMC from concept to reality. The collection totals 7 boxes, equaling 3.5 cubic feet. The materials are in good condition.