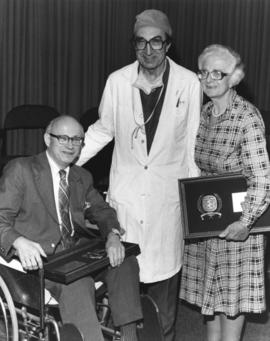 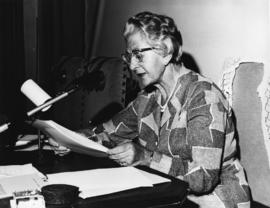 Hilde Bruch was born in Dulken, Germany on March 11, 1904; her family was Jewish. An uncle encouraged her to study medicine and she graduated from Albert Ludwig University with a doctorate in 1929. She took academic and research positions with the University of Kiel and then the University of Leipzig, but left academia for private pediatric practice in 1932 because of rising anti-Semitism. She had already begun a career in pediatric physiology before she left Germany in 1933 after Hitler came into power. She then spent a year in England, where she worked at the East End Maternity Hospital, which served a Jewish community in an impoverished part of London. She moved to the United States in 1934 and worked at the Babies’ Hospital at the Columbia-Presbyterian Medical Center in New York City. She obtained her American medical license in 1935 and, in 1937, began research on childhood obesity, the beginning of her career studying eating disorders. She became an American citizen in 1940.
From 1941 to 1943 Bruch studied psychiatry at Johns Hopkins University in Baltimore before returning to New York to open her own psychiatric practice and teach at Columbia University. She took a position in psychiatry at Baylor College of Medicine in Houston in 1964 and remained in Houston for the rest of her life. She died on December 15, 1984.

The Hilde Bruch, MD papers contains reprints, books, office files, patient records. The early gift of books and reprints, and the posthumous donation of books and papers have been integrated into the larger group of office records, making the total size of the collection 56 cubic feet. The processor of the papers has for the most part left Dr. Bruch's own arrangement intact. The arrangement includes office files, patient records dating from the 1940's, correspondence from colleagues as well as hundreds of letters from lay persons acquainted with Dr. Bruch's work on eating disorders. There are reprints from colleagues, correspondence with publishers, family and friends. Also included is same correspondence from Dr. Bruch's family in Germany and the Netherlands, and memorabilia from her long career in America. Dr. Bruch's papers offer important insights into psychiatric trends in the second half of the twentieth century, particularly into the treatment of psycho-social illness. They also detail in the life history of an individual, the personal and cultural crises precipitated by exile from Nazi Germany, and the struggle of women for greater participation in science and medicine, both significant phenomena in the history of this century. The collection equals 56 cubic feet consisting of 84 boxes.

Open for research. Patient files are restricted, and consultation with an archivist is required.

Audio recordings have been digitized and accessible with a computer.

A finding aid for this collection is available.

Dr. Hilde Bruch presented her papers to the McGovern Historical Collections and Research Center over a period of years; one portion, 213 reprints and nine books arrived in 1978. This collection was greatly augmented and expanded in 1983 when Dr. Bruch closed her office and gave her office files and patient records to the HRC. After her death in December 1984, her family completed the collection with their donation of some of books, reprints and journals from, her home.