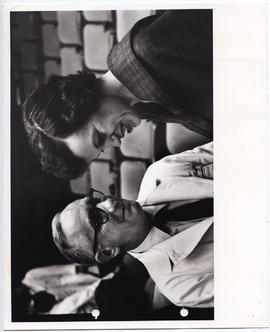 Russell John Blattner was born July 3, 1908, in St. Louis, Missouri and attended Washington University there. He received his Bachelor of Arts degree in 1929, and his Doctor of Medicine degree in 1933. He took his hospital training with an internship at Barnes Hospital in St. Louis, and his residency at St. Louis Children's Hospital, and then at Princess Elizabeth of York Hospital for Children in London, England. He returned to St. Louis and in 1937, began his teaching career as an Instructor in the Department of Pediatrics in the Washington University School of Medicine. In 1940 he was promoted to the rank of Assistant Professor in his department. Three years later, in 1945, he advanced to the rank of Associate Professor.

His career in Houston began in 1947 when he was given the position of Professor of Pediatrics and Chairman of the Department of Pediatrics at Baylor College of Medicine. He was actively involved with the creation of the Texas Children's Hospital, beginning in 1948 when with architects he toured hospitals in Canada, Mexico and the United States in search of ideas for the soon-to-be-built Houston institution. His efforts came to fruition in 1954, when the new pediatric hospital opened its doors. Dr. Blattner worked continually to insure the success and development of Texas Children's Hospital as a sub-specialty hospital care hospital for children and as a teaching and research institution, and to promote excellent pediatric care throughout the Texas Medical Center, as well as in Harris County by developing an affiliation between Baylor and the city and county health departments. He helped to establish the Blue Bird Clinic at The Methodist Hospital, and was instrumental in securing the initial funding for the South Western Poliomyelitis Center which would later become the Texas Institute for Rehabilitation and Research.

Dr. Blattner had a long and distinguished career for which he often received recognition from his colleagues within the medical profession. In 1956 the Washington University School of Medicine Alumni awarded him their Alumni Citation for Outstanding Achievements and Service He was also designated Distinguished Service Professor at Baylor in 1968. In 1971 he was given the newly established J.S. Abercrombie Chair in the department of Pediatrics at Baylor. He was honored again in 1972 and in 1974, when he received the Outstanding Faculty Award from the Baylor College of Medicine Alumni Association and the American Medical Association's Abraham Jacobi Award. He became Emeritus Chief of Pediatrics at Hermann Hospital. He retired in 1977, but continued his affiliation with the Texas Medical Center by acting as a consultant to hospital and college, and as Distinguished Service Professor of Pediatrics at Baylor. In his retirement years he became affiliated with the Well Baby Clinics for the City of Houston Health Department, where he continued his care for the pediatric subject and his academic interests by training Baylor students assigned to the clinics.

Dr. Blattner served his profession not only as an administrator and teacher but as a research scientist as well. He made major contributions in the field of infectious disease, most notably in the study of encephalitis. He was, moreover, noted for his concern and compassion because he ''combined specialization with old-time empathy and concern with each patient (WATCH, Spring 1977). He died December 6, 2002, in Gaithersburg, Maryland.

The Blattner collection contains Dr. Blattner's research work throughout his career in St. Louis and Houston. It contains photographs, research materials, reprints, and publications. It offers a record of Dr. Blattner's professional life and contains no personal or family records. Collection materials date from 1936-1985.

The collection has been maintained to a great extent in the order in which Dr. Blattner himself arranged it. This is particularly true of written materials concerning his work with avian embryos and with his research in vaccinia and viremia.

The collection was originally arranged into three series: Published Works, Research and Scholarly Works, Professional Career. Two addendums, in 1985 and 1992 were added as fourth and fifth series. Finally, Department of Pediatrics and W.A.T.C.H. Publications make up the sixth series.

It was necessary to discard some duplicate materials, especially numerous duplicate reprints of articles by Dr. Blattner and his colleagues. Other materials were withdrawn from the collection to be kept elsewhere in the library. (See Guide for list of withdrawn items)

The Houston Metropolitan Research Center at the Houston Public Library has a 1982 oral history with Dr. Blattner, OHJL15 (https://cdm17006.contentdm.oclc.org/digital/collection/Interviews/id/405/rec/6).