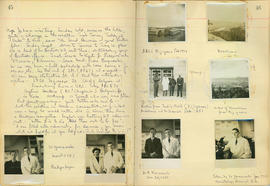 He studied medicine at Tufts College and graduated in 1932 with a Doctor of Medicine degree. In 1961, he was awarded an honorary Doctorate of Science from the College of the Holy Cross. Dr. Moloney was associated with the Medical School of Tufts University for forty years. He began his career in 1934 as an assistant, then rose to a full professor in 1971 and retired in 1974. Dr. Moloney became Emeritus Professor of Medicine, Harvard Medical School in 1974- and Emeritus Physician and Chief of the Hematology Division, Peter Bent Brigham Hospital in 1967. He also served concurrent posts: Consultant, Boston Hospitals, 1938-, consultant, Boston City Hospitals, 1948-, director of clinical laboratories.

He is a fellow or member of the following organizations: American Association for the Advancement of Science, American Federation of Clinical Research, American Medical Association, American College of Physicians, Association of American Physicians.

Dr. Moloney served in Japan with the Atomic Bomb Casualty Commission (ABCC) as the Chief of the Department of Medicine from 1952-1954. His hematology research at ABCC allowed him to work scientists from many departments.

William C. Moloney MD kept a personal journal, with photographs, for much of his two years in Japan with the Atomic Bomb Casualty Commission. In January of 1986, Dr. Moloney donated his journal, correspondence and diary pages to the Harris County Medical Archive. He died in 1998 at the age of 91. His first contribution was a set of ten reprints representing his work with the ABCC from 1952 to 1954. Dr. Moloney's journal is a fine document, one which will be of great use to historians. It is an important record of personal impressions, thoughts and details of events. The journal gives new insights into the work of the ABCC and into the people who participated in that work. Dr. Moloney wrote in his journal from April 1952 to February 1954. The Korean War was on and there was a great deal of military activity in southern Japan. The collection is open for research. The collection consists of a handwritten journal, loose letters and reprints.

In this collection are letters, a journal and reprints. There are three letters written in May and July 1952. Two are typed and one handwritten. There are also loose pages from his diary starting on the Moloney family's departure from Boston in April 14, 1952 with the last entry dated December 11, 1952. There are references to their near disaster off Hilo on the way to Japan. The last item in this series is the jewel in the crown - Dr. Moloney's journal. The entries date from January 16, 1953 to February 27, 1954. Unfortunately there are gaps where he did not make entries. The numbered pages between 195 and 200 are missing. Dr. Moloney literally wrote from cover to cover in his journal. Glued or taped onto the journal pages are 165 black and white glossy photographs (there are 166 photographs in the journal) and a variety of other items (business cards, invitations, clippings, announcements, a golf score card, yen, postcards, driver's permits.) The typescript translation of an article from The Chugoku Press, 20 September 1953 originally placed between pages 101 and 102 has been removed and placed in envelopes. A folded map of Japan remains in the back of the journal.

The physical condition of the journal is mixed. The photographs are in good condition and the ink on the pages remains clear and crisp. The spine is broken and the pages are becoming detached. The tape and news clippings have yellowed and become brittle. The collection encompasses the years 1952-1954 and is 0.25 cubic feet (1 box).

This collection is arranged into the following series.
Series I. Journal
Series II. Reprints

The William C. Moloney Collection features a personal journal, diary pages, three letters and a set of ten reprints. Series I and II are filed in the same box.

The collection is open for research.

This material will not be reproduced due to the fragile nature of the materials. Consult an archivist at the McGovern Historical Research Center for more information.

In January of 1986, Dr. Moloney donated his journal, correspondence and diary pages to the Harris County Medical Archive (later renamed the John P. McGovern Historical Collections and Research Center). His first contribution was a set of ten reprints representing his work with the ABCC from 1952 to 1954.

Related materials include the assorted ABCC collections located at the Historical Research Center. Consult an archivist for more information.

Finding aid based on DACS ( Describing Archives: A Content Standard).

All hinges, staples, and paper clips have been removed. An archival bond was interleaved to keep related documents and attachments together. The loose diary pages, correspondence and typescript translation of a newspaper article have been placed in envelopes to maintain their integrity and to contain some possible contaminants.