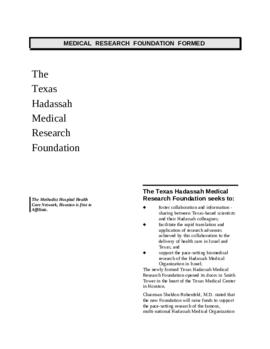 This looks like draft Press Release piece of the announced the affiliation with The Methodist Hospital Health Care Network. Talks about initial plans to organize a conference, list of additional member of the effort, including a Tx Congressman Martin Frost as honorary member, and a report from an Israeli scientist from Hadassah Zeev Weshler on the issue facing them with immigrants to Israel from the contaminated areas.