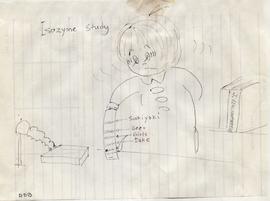 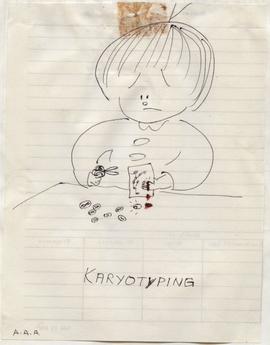 Cartoon of Dr. Akio Awa conducting research involving karyotyping. Joke spoiler: He appears to be 'working his fingers to the bone' where he is seen accidentally snipping his fingers off with a pair of scissors.

The John.T. Moore MD realia collection contains the following:
A gold watch with chain and Texas Surgical Society medallion, 1940
A gold ring with JTM initials, relief of Aesculapius on one side of ring and the caduceus on the other. Ring inscribed with date of “6.17.36”.
3 medallions: medallion to John T. Moore from [Houston] teachers, 1924; medallion from Jefferson Davis Hospital presented to John T. Moore for service, 1919-1940; and medallion from [Alpha Omega Alpha] dated 1902 on front and inscribed on the back with “Texas, J.T. Moore, 1935”.
A pin to hold chain onto a button hole.

The collection contains one folder in the Small Manuscript Collection (SMS) box. 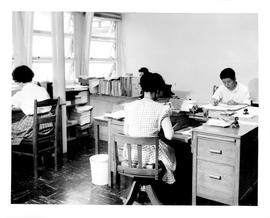 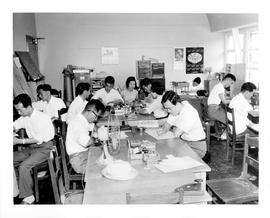 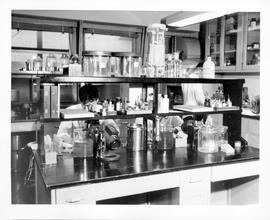 Atomic Bomb Casualty Commission Parasitology staff at work in a laboratory using microscopes and other instruments. 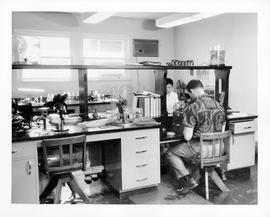 Atomic Bomb Casualty Commission Pathology staff at work in a laboratory using microscopes and other instruments. 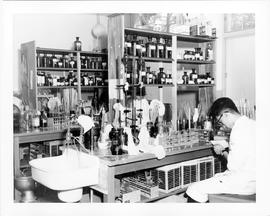 Atomic Bomb Casualty Commission Histology staff at work in a laboratory with beakers, flasks, stirring rods and other equipment. Above the workspaces are shelves filled with bottles. 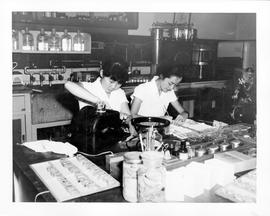 Randolph Lee Clark, MD. Interviewed by Don Macon. Dr. Clark was the son of educators and long-time president of MD Anderson Hospital. Dr. Clark discusses his personal and family history in the Texas towns of Hereford, Midland, and Wichita Falls. He talked about the founding of Add-Ran College, now known as Texas Christian University in Fort Worth, named after his great uncles Addison and Randolph Clark. Dr. Clark related his early interest in sports and activities at the summer resort of the College of the YMCA at Blue Ridge, South Carolina, where he worked for two seasons. He revealed the impact on his professional years of the 18 months he directed research for DuPont at their Newark, New Jersey Plant, after his graduation from the Universality of South Carolina with degrees in Chemical Engineering, English and Pre-Med, and before receiving his MD from the Medical College of Virginia in 1932. He talks about his fascinating career, his professional associations at home and abroad, his pioneering work in surgery and his long association with and love for the Anderson. The interview ends when he receives a phone call from the University of Texas. 11/30/1973, Color-sound. Produced for Texas Medical Center Historical Resources Project.