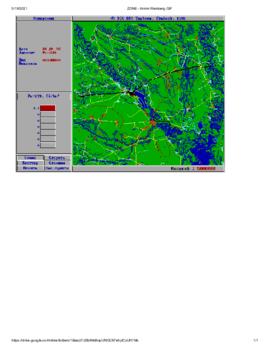 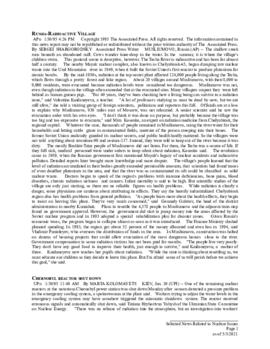 News clippings related to Chernobyl and other radiation events

News clipping from 1993 relevant to our interest in Chernobyl

example of one news story ... "Belarus plagued by lingering Chernobyl radiation, UPn 8/29/93 11:00 PM Belarus plagued by lingering Chernobyl radiation, infectious illnesses UPI NewsFeature (800) Adv. Mon. Aug. 30 or thereafter By VALENTINA STAROVA MOSCOW (UPI) -- The government of the former Soviet republic of Belarus recently issued chilling statistics that confirmed the worst fears of its readers about the legacy of the 1986 Chernobyl nuclear accident. The figures showed that thyroid cancer -- a rare but deadly illness often linked to radiation exposure -- is on the rise in Belarus, with almost as many new cases recorded in the first six months of this year as in all of 1992. " 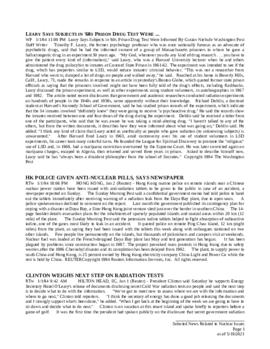 News clipping from 1994 relevant to our interest in Chernobyl

news coverage that could inform our work in Chernobyl and USA... eg, "CLINTON WEIGHS NEXT STEP ON RADIATION TESTSRTw 1/1/94 9:42 AM HILTON HEAD, SC, Jan 1 (Reuter) - President Clinton said Saturday he supports Energy Secretary Hazel O'Leary's release of documents disclosing secret Cold War radiation tests on people and said the next step is to decide what to do with the information. "